ProfitTrailer is now upgraded to version 2.2 which is a major change from version 1. The interface is slick and the bot has been running stable so far. I am running it on a VPS (Virtual Private Server).

For a novice, the addition of an interface helps as a lot. It is easier to navigate and way more intuitive than the previous version. Below you can see my results as I will update it through the year.

For more results and strategies, I recommend following CryptoZen On YouTube. It has been a while since he uploaded videos but hopefully he might return in a bull market.

You can find part 2 of this post here: Crypto Trading With ProfitTrailer Bot Part 2.

Disclaimer: Some of the links in this article/post contains affiliate links to their products.

Wednesday 27th Of February
A bit surprised by the good results so far. As you see from the screenshot below, things are chucking along pretty steadily. I don’t want to jinx my self but I guess it is only a question of when Bitcoin tanks. Then all my pairs will tank as well.

When I used ProfitTrailer back in early 2018 it didn’t work properly for me. It would disconnect and I had to continually monitor the bot.

After the upgrade to version 2, I have had zero problems. Not one single disconnect.

Friday 29th Of February
It all started well using a simple EMA strategy. This was mostly due to get lucky and ending up in some pumps. I had 3 trades of 50% profit! I have ProfitTrailer set to take 50% profit no matter what.

I have looked around on tradingview and done some backtesting. With 100% reinvest equity I have found some decent results (not including the fee).

I will change the current strategy after I sell off the last 3 pairs. 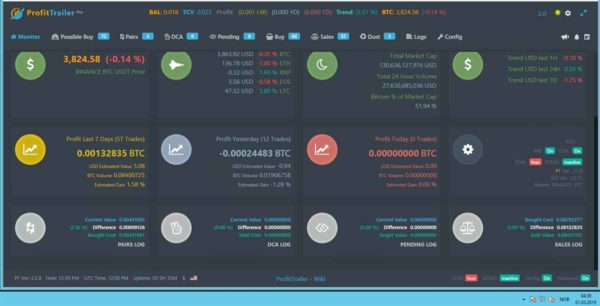 Monday 4th Of March
This is not going to well. Things have been going downhill and I have tried to adjust the strategies to counter the bearish trend. Needless to say, it has not worked.

I still might be profitable if I set the bot to run on a 1-day schedule, which I might eventually do.

For the time being, I am on the 5min (!) timeframe. Has anyone ever had a steady win rate on the 5min for an extended period of time? I doubt it.

This week I will probably test with RSI. Started it yesterday and until today it made 5 trades. 4 winners and 1 loss.

The problem is that the losing trade ate up all the profit from the 4 wins. Still testing with the smallest buy-in. 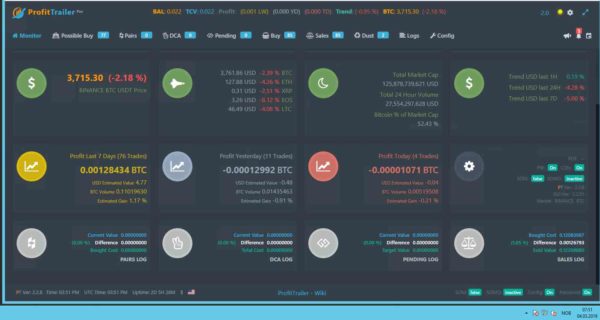 Wednesday 6th Of March – Blood red
This is not fun anymore. I think I have over 10 straight losses in a row. See screenshot below.

When I start losing I start to change strategy, that is probably not the way to go about it. I changed strategy to RSI with stop loss set. But that did absolutely not work.

I can DCA my holdings. That is risky though, and I might actually have to sell for a loss. There are many of these coins that will fail. I do not want to hold one of those bags.

I am trying to trade with momentum which is easier said than done. So far I have tried EMA, STOCH and RSI. The most successful have been EMA but that was only due to some pumps.

Even though I have had many more losses than wins I am still profitable due to those three 50% pumps.

I will keep going and see if I can turn the bot profitable on the 5min timeframe. Will update soon.

Thursday 7th Of March
Winning. I did a few changes yesterday, moved from EMA to HMA. As you can see I have been winning!

Of course, I have to test further. Not too much movement in the market from yesterday, subtle movements and no spikes.

I am not sure this is a winner though. I spent 5 euros on the signal integration between ProfitTrailer and Tradingview which I am going to try on tonight and let it run 24 hours. That is if I can get it to work.

Sunday 10th Of March
Indifferent results for the last couple of days. I integrated the signal option with ProfitTrailer via Tradingview. It works very well. Well done to everyone at PT.

I’m trying to find a script that could be profitable on a shorter timeframe. Right now I am testing the Wave Trend Oscillator from Lazybear on Tradingview. The results have been OK with minor losses so far but I am still trying to figure out best settings.

As for the trading pairs I am sticking to LTC, BNB and other big coins, this is because the market has been pretty flat for the last couple of days (before another drop?). Results so far of week 10 below. 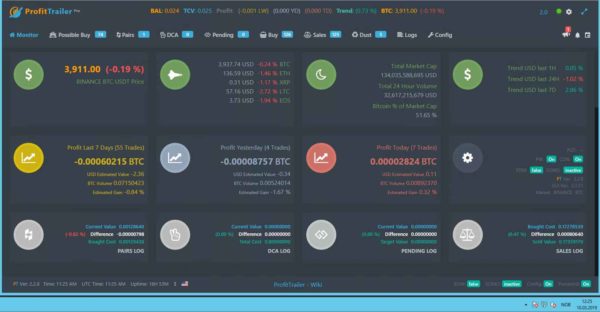 ProfitTrailer Results Week 11 Of 2019. Choppy – Not Much Action

Wednesday 13th Of March
No big movements so far this week. Bitcoin is not doing any moves up or down so most altcoins are going sideways.

I am sticking to the big pairs and have decided to go with the following 5 for the rest of the week: Binance Coin (BNB), Litecoin (LTC), NEO, Stellar Lumens (XLM) and Ontology (ONT).

So far I have been using GAIN with trailing profit as SELL strategy. This has worked somewhat OK but I am suffering a small loss on average. Changing it now to the SIGNAL option via Tradingview.

ProfitTrailer Results Week 12 Of 2019. No Progress

Monday 18th Of March
Not making any progress as of late. In fact, I am just barely winning.

After tinkering around with the Wave Trend Oscillator I also implemented the Tradingview signal for SELL, not just Buy. Unfortunately, that did not work very well and I lost more than by just having ProfitTrailer sell it with a simple strategy like GAIN.

It must be said that I am at a bit of a loss trying to figure out something that works on a short timeframe.

Right now I am using Exponential Moving Average (EMA) as a strategy. Essentially, it works well on the 15min timeframe. The Problem is that I get caught up in pumps. And since it is a lagging indicator I end up with some very bad results.

See for yourself below 🙂

Start off With Low Initial Costs And Keep Testing

27th Of February
I started with an initial cost of 0.0012 BTC per trade. Pretty obvious. After testing this for 20 trades I have had zero coins go to dust. The buying and selling indicators work as intended.

After 20 trades I upped it to 7% of my total BTC holdings per trade.

I am running the bot on a VPS (Virtual Private Server). I picked the cheapest one I could find and pay 7$ per month on Virmach for the SSD1G version.

I will update this if I make changes to the cost per trade.

4th Of March
Initial cost is still the same at 0.0012 – 0.0014. I have had 2 coins go to dust. Only fractions, less than 1 USD so it is not important. I also restarted the bot after some switching back and forth between btc and usdt as the base currency.

10th Of March
I am still at the minimum Initial cost. I have had a few more pairs go to dust. Now 6 in total but the overall value is only 1.43 USD. I had to change the clock settings and restart the bot as it was out of synch. A few minor details popping up here and there. Standard stuff.

Very happy with the VPS so far. It needs a restart once in a while as it runs out of RAM. It has been stable and not had one single shut down without me interfering.

UPDATE 11 Nov 2019. You can find the latest updates on automated trading here: Passive Income In Cryptocurrency With a Trading Bot